Customer Insights are Your Advantage - Part 1 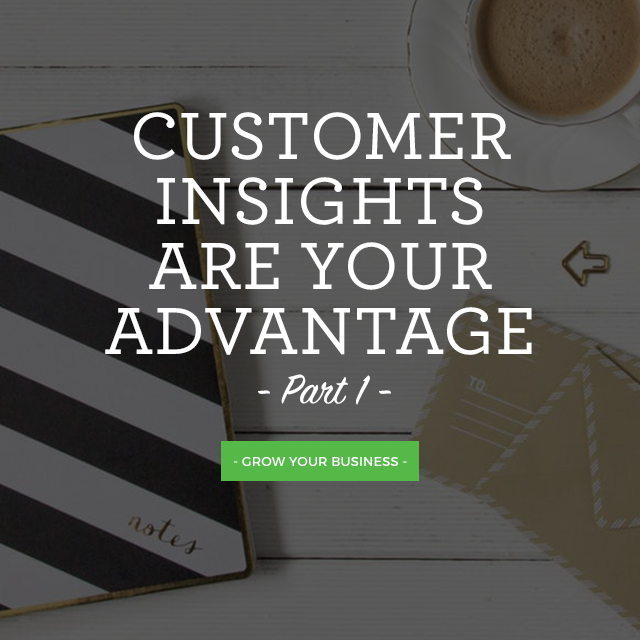 Are you looking for a competitive advantage in your cake decorating business that most of your competitors are not leveraging?  If that’s the case, think in terms of what you know about your customers or perhaps what you don’t know already.  There’s power in knowing who your customers are and keeping that data handy so you can market to them long after that first sale.

Someone once said the knowledge is power but that isn’t exactly true by itself.  I’d modify that to say instead:  It’s the application of knowledge that is real power – marketing power for you.  I talk to professional cake decorators all over the world and I often ask them one question:  How are you collecting your customer data and if you do, how are you using it?  Unfortunately, the answer often is puzzled look followed by the question:  What do you mean, collect my customer data?

Let me share with you a personal story that taught me the value of collecting and then using customer data to maximum business advantage.  My father was a butcher by trade and was one of the best known in the region.  He owned a small butcher shop and I worked there every Saturday for years.  Keep in mind this was well before personal computers made the scene.  I was always amazed at how my father knew every customer – and I mean really know who he or she was in context to his butcher business.  When a customer came in to the store, he knew exactly what cuts of beef they liked, the kinds of deli meats they bought, and what kinds of cheeses they preferred and more.  He knew where they lived, the telephone number, how many kids they had, what they did for a living, - he knew them better than probably their next store neighbors.  Of course, he collected this knowledge over time, as they become regular customers.  How did he keep all this in his head I would wonder as a teenager.

Then one day I discovered his secret.  I notice that he would go back to a desk area he had in the store, took out a box that had a bunch of 3 x 5 index cards in them.  He’d scratch a few notes on one and put in back in alphabetical order.   My curiosity was getting the best of me so I naturally took a look at what was in this box.  To my surprise, on each of those cards – literally hundreds of them – was information on every customer.  Besides basic data like contact information, he had methodically scratched different pieces of information as he learned them.  Many had birthdates on them besides data on what meats they liked and how they liked them cut.  He didn’t miss a trick.

My father didn’t have a degree and was trade school educated in Germany but I realized many years later in my marketing career that he was a far greater businessman than I gave him credit for at the time.  He was literally a marketing genius.  He had learned somewhere that the better you really know your customers, the better you are able to sell them more product over time.  He understood that the deeper his knowledge of his customers – the more opportunity he had to keep them coming to his butcher shop instead of them buying their meats at the supermarket.

DO YOU THINK YOU’RE THE NEXT CAKE OF THE MONTH WINNER?

and you could win Satin Ice!